Lured by the yama (the mountains), Shigeaki Adachi and Takeshi Jinnouchi, two freelance kikori (lumberjacks) make yama their field of work. The pair are now based in the mountains of Sapporo, working relentlessly to build roads. These roads both connect and create a border between the mountains and the people. Adachi and Jinnouchi’s gazes drift towards the mountains as we discuss their roads

Shimokawa National Forest, a place I worked when I was young

A valley of complete peace. A large elm tree and flowers that cover the forest floor—time stops here. It is a place where the words “perfect” or “harmonious” take their full form. Here, I would take off my shoes and just sit for hours.

Kaminayoro, Shimokawacho’s satoyama (a term used to describe the collective nature surrounding rural communities in Japan, especially those that are maintained by humans), where I lived for four years from 1996

It had become a regenerated forest after felling and was an incredibly peaceful place. Many wild animals roam free here and the power of living creatures is strong. It was also the place I built what is probably Japan’s first ever straw bale house.

A forest that is visible from the main highway in Shimokawacho

In 1995, large trees were planted here and I was able to imagine what it had looked like in the past. I became confident that even in the harsh environment of Hokkaido, a wonderful forest could thrive. Even now, we are still making forests based on this one. Around 10 years ago though, it was cut down.

A forest in Itaya, Nakagawacho

This forest in northern Hokkaido has a great mix of trees, from native todomatsu conifers to broad leaf trees. The 130-year-old Tentodo conifer is very different from its artificially planted todomatsu counterparts; it is a completely natural specimen. A place left untouched because of its steep topography.

I can’t really call it a forest, but it was for me at the time. I remember that there was a tree there that I named Elephant’s Foot for no apparent reason, and I used to go there just to see it. When we moved from Higarishi in Sapporo to the Southern Ward, we took the tree with us to be replanted but it withered and died.

When I lived in Takinouecho, I used to drive there at night. Only in the forest can you hear the deep rumblings of the mountain and witness the mysterious outlines and scenery of pure nature. Plus the moon is beautiful there.

There is a ‘Children’s Village in the Forest’ run by an elderly couple affectionately named ‘Ojiji’ and ‘Obaba’, where children from all over the country go to camp and experience life in the forest. Every summer, local residents set up tents in the forest for the children and create a community just for kids. Although it starts off strict, the kids learn valuable lessons about working hard.

A very small, privately-owned forest of about 0.04 ha, in the southern part of Tohmacho

From the moment I entered the forest, I felt a strong sense of loneliness about the space. When I was about to leave, there was a magical force of sorts that was rooting me to the spot and I wasn’t able to leave for a while. It is a forest that triggered for me a stronger awareness of the individuality of each forest.

In Japanese, there are two notations—one in Japanese script, katakana; one in Chinese-originated kanji—for the concept of the mountain, which spark different imagery. Here, Jinnouchi and Adachi discuss the difference between the two. When they’re asked for a short answer to the question “What is yama?” it becomes clear that there’s more to the question than anticipated.

Adachi: “Most people think of a mountain as a place for climbing, like Mt. Eniwa. But a yama is a place where grass can be cut and is the site of our work. For us, I think ‘You going to the yama today?’ means ‘You going to the work site today?’”

Jinnouchi: “For me, it is also my life. For example, if you were to go out picking wild vegetables, instead of spending time preparing insect repellent, bear bells, etc., all I need to do is step out the front door to pick and eat them. Lying naked outside, I watch the wild birds and small insects gathering and drink beer. If I cook meat outdoors I need to take care to clean up properly afterwards to prevent the bears that would inevitably come otherwise. That is a way of life, no? But even as I say this, I can’t convey as much as I want to.”

There is no common language with the people who live in the city, say the pair. People usually think of places you can climb or hike when they see the kanji stylisation for mountain, so katakana is used to distinguish it from this more common meaning.

Adachi: “Yama simply means the earth’s surface. When asked what a yama is, I say it is a place where all living things, including humans, live. It is just the ground, and just the earth. No more, no less.”

Jinnouchi: “All I can say is that yama is yama. No explanation needed. If you come here, you will see too. That is why I am creating a road to encourage people to come see for themselves.”

N.B. Throughout the English pages, either “the mountains” or simply “mountain” were used depending on with best reflected the original meaning.

Born in Sapporo in 1982. While studying at university, he worked as a photographer, and in 2009, he moved to Takinoecho. There, he began training in forestry at a company that was involved in forest research and other forest work. In 2012, He started his own company called outwoods. Outwoods undertakes various outdoors pursuits, from forestry work in the mountains to selling firewood and nurturing the satoyama , the collective nature surrounding rural communities in Japan, especially that which is maintained by humans. In winter of 2016, he returned to his hometown of Sapporo and is now working as a lumberjack. Most recently, he has participated in an exhibition on the theme of’The Mountains’ at the KADO gallery in THE KNOT SAPPORO. 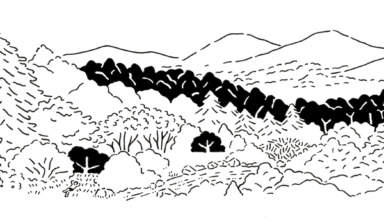 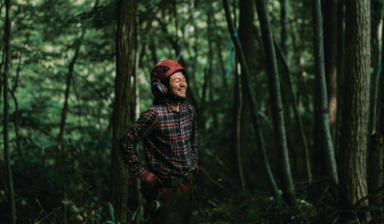 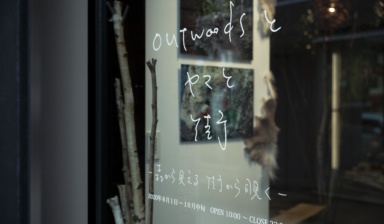 outwoods with woods and cities